There’s something to be said about having a nice quiet evening inside with your favorite board game reviews, Board @ PAX. Where you can enjoy a humorous little blog with wit that isn’t as dry as the sands of the desert. And you can enjoy the ebbs and flows of the internal monologue being put to paper while imagining yourself on a tropical island. But then, and idea strikes you out of the blue…maybe I should be playing a game instead. Well, that’s basically how I started playing Forbidden Sky. 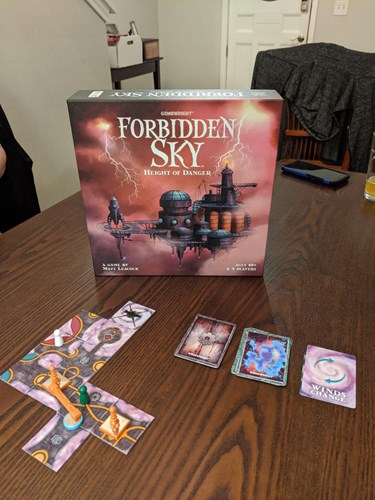 Forbidden Sky is a cooperative tile placement game from one of the greatest cooperative board game minds in existence, Matt Leacock. His game list includes some tremendous board gaming experiences with Pandemic Legacy Seasons 1 and 2, the first of which is currently the second highest rated game on BoardGameGeek, Pandemic along with many of its expansions, Forbidden Desert, and Forbidden Island.

Now, let’s talk about components because I think that’s really where this game shines its brightest! In Forbidden Sky, players will be asked to actually build a circuit around the table’s physical pieces. And the centerpiece for the game is an actual rocket with some lights and sounds on it that will start up once you’ve successful completed the circuit. It really was a satisfying experience to get that to light up and make noise at the end of our game. It’s a completely unique experience for this game and something I think most people should get their hands on and mess with once. I give Matt Leacock many props for what he did with the components of this game.

So, what do I think of the game overall? For me, it isn’t the best game in the series. I personally prefer Forbidden Desert as a co-op experience, but this is pretty good for what it is. But the weird luck aspect of this game will sort of get to you. There are a limited number of spaceship launchpad pieces in the game and they can randomly be all near the bottom or top of the tile deck. Without evenly spacing them, this game will feel really swingy. For example, we had an ability that let us pull the top 5 tiles and choose one to keep and put the rest on the bottom of the tile deck. We drew 3 of the launchpad pieces and that meant we buried two to the bottom. This was early in the game so it wasn’t like the odds had changed much throughout the deck, but it was one of those times where the game could have been over super quick. Instead, we played it for way longer than a normal game. I think, if you were to take the launchpad pieces and seed the deck similar to Pandemic with the epidemic cards, you could really smooth out the swings. But even with that, the actual placing down and “wiring” of the launchpad is extremely satisfying and just a really cool concept for a game.

I give this game 2.5 snoozes. Again, this game really hits it out of the park with table presence and unique experience, but the swings of the game feel too much to overcome at times. But if you really don’t mind the possible uneven swings in this game where sometimes you’ll win too quickly and others you’ll have basically no chance, give this game a shot. Because you know what they say, a game’s beauty is in the Sky of the beholder.