What have I gotten myself into? I asked rhetorically, as I looked at the letter again. "We know what you saw." I wasn't even sure I knew what I'd seen. How could these people?

"We can help you. You're not alone," the letter continued. Well, that much was true. I certainly needed help. I was jumping at shadows and there were shadows everywhere in a town like this.

"You'll meet another witness at the Sunset Diner and Grill at dusk. Work together to make it out of town. If you think they've been compromised, you can call us on any payphone, and we'll send someone to take them out." Wait? Compromised? Why couldn't they just send that someone now? I had so many questions, but one thing I didn't have was the luxury of time.

I looked nervously at my watch. Where were they? The sun had set 10 minutes ago and there was no sign of whoever I was supposed to meet. How would I even know who they were? I decided to go home and try to find some other way out when I heard footsteps approaching. I tried my best to act casually.

"Nice night," I commented, while I tried to appear interested in the newspaper.

"Mm-hmm," she muttered in response. "Did you…" she began to ask, before she trailed off.

I looked up from the newspaper and noticed it was upside down. Shit, I thought, I am not cut out for a life of intrigue. "Sorry, miss, I didn't catch that. What were you saying?"

"Did you, erm, get a letter?" she stammered.

So, this was who I was supposed to meet? I suddenly got cold feet. What if she was compromised? "Umm, maybe. A letter? Everyone gets letters. I was just on my way home."

"It's just… It's just, that… Do you always read the paper upside down?" she asked.

"That obvious?" I chucked, nervously. "You're not what I expected."

"Oh?" she asked, as she looked at me questioningly. "What were you expecting?"

"I couldn't agree more," she said. "So, should we get started? It's a long way and it's already getting dark."

"Let's go," I agreed. "Strength in numbers and all that."

We began our journey across town, trying to conceal our makeshift alliance. The mob had probably caught wind and was expecting two people. Although anyone out this late would be suspicious together or alone. Unless they were connected.

We hadn't made it far before I heard a gasp up ahead. I rushed to her side. "What happened?"

"I'm not sure," she offered. "I was just walking down the street when a man jumped me. I felt so powerless to stop him. Where were you?"

"I was just behind you. There wasn't anything I could do. It all happened so fast," I replied. "Are you ok?" I asked, as I helped her to her feet.

"He stabbed me, but it's just a scratch. I think I'll be alright. We've got to find some way to defend ourselves. Can you still call in a hit?"

The question made me nervous. Of course, she would know I could call in a hit. She got the same letter. "Yes, I guess so," I replied. "But it's far too early. We still have a long way to go."

Instead of calling in a hit, I laid all my cards on the table, telling her everything I knew and had seen. It was all I could think of to gain her trust. If that didn't work, I wasn't sure what I could do. I knew I could trust myself. How could she convince me I could trust her? I thought for a moment before deciding I wasn't sure.

She thanked me for my honesty but offered nothing in return. Playing hardball. I guess I would, too. She just caught me in a moment of weakness after the assault.

We continued our way through town, again, trying to look inconspicuous, although I feared that ship had sailed. I caught a bus, but I wasn't familiar with this side of town, so I kept the ride short. I felt safer on the street. I couldn't see very far, but I had a slightly better idea where I was going.

I reached a broken road and thought, What is this? Road closed? Could this night get any worse?

She caught up to me and said, "I think there's someone behind me. How are you doing?"

"I'm pretty beat up. I'm not sure how much further I can make it without getting some treatment." I tried to be strong. I knew she was in worse shape than I was. "Look," I continued, "I know you don't trust me. And an hour ago, I didn't trust you. But we're both barely alive. We have got to trust each other. If one of us wanted the other dead, they'd be dead by now. I trust you."

"You're right," she answered. "I just am not sure that trusting each other now will be enough. Here, I called in some favors from my friend, Ms. Cardello. I can get you some medicine if you think you can get past this road. Then I can deal with whoever's behind us and hopefully catch a bus to meet up with you. What do you think?"

I looked around nervously. When had I last seen a payphone? Was it before night had fallen? I sighed. "Ok, I think we have to try." I prepared myself to dart up the road, but I had a few tricks up my sleeve in case things went south. I took one last glance back to see what she was doing before I would sprint off and try to pass the broken road.

I watched helplessly as the pin fell to the ground. Where in the Sam Hill did she get that? I wondered.

She cackled as she flung the grenade. Sure, it would take care of whoever was hiding in the shadows, but the shrapnel would also finish me off.

Or so she thought.

I'd exaggerated just how beat up I was. It was true, I was barely hanging on, but I was hanging on. I was stronger than I'd let on. Things were bleak, but it would take more than a grenade to finish me off.

I sprinted recklessly off into the darkness, trying to make it past the broken road. Think of something, dammit! I looked around me. Things were starting to fade. Was that the sun going down? No, the sun had been down for a while, now. I wasn't sure how much further I could make it. "There!" I yelled, surprising myself that I'd found the energy for that. "A phonebooth!"

I fell as I reached the door. I dragged myself in with my last gasp and pulled myself up to the phone. I retrieved the letter from my pocket and painfully dialed the number. *Cough* Was that blood? It didn't matter. Blood or no blood, this would be the last thing I ever did. I thought I heard a voice on the other end of the line say, "Understood."

Moments later, a shot rang out from where she stood. I watched as she fell to the ground. A second grenade rolled out of her hand. That bitch!

I watched as a pair of wire cutters fell from her pocket.

I scurry across a field. I have to shake my pursuer. Almost there. My burrow is just past the tree line. Too late. The raven swoops from the sky and scoops me up. I struggle to break free, but she adjusts her grip. Her claws cut into my sides. So this is it.

Just then, I hear the cry of a hawk as it closes in on the raven, wrestling her from the sky. As she falls, the raven releases her grip on me to try, hopelessly, to defend herself. I watch as the ground grows closer. It doesn't matter. The fall will kill me. The raven's death brings me little solace.

I crash through a tree, twigs breaking. With my last gasp I look skyward and watch as, out of the tree, a mantis falls.

In case it wasn't obvious, I thoroughly enjoyed Mantis Falls.  But you knew that because you watched our top 5 games at PAX South video.  I can't give it any snoozes because who can sleep when your partner might be trying to murder you?!?  I may not understand Michael's review guidelines, though.  As far as I can tell, you should check for it on Kickstarter on 3/31.  Or just follow the project here.  And sign up for their newsletter here.  Thanks to Erica for playing it with me!  Even if you did kill me. 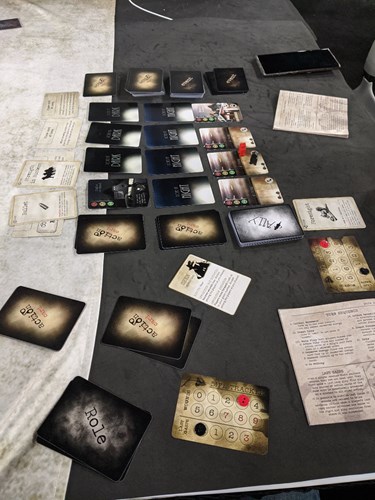