Board @ PAX: Just One

I know people might be looking ahead to week five of the Board @ PAX series, but I believe doing that would do a disservice to this next entry. For my first four years at PAX, I had been looking for a good party game that would easily mix a light-hearted game with some simple strategies. Each previous entry had left me with one of three emotions about the game: too simple, too boring, or too hectic. Yeah, I’m looking at you, Two Rooms and a Boom. But now, there’s just one game that I would bring to my next party, Just One. 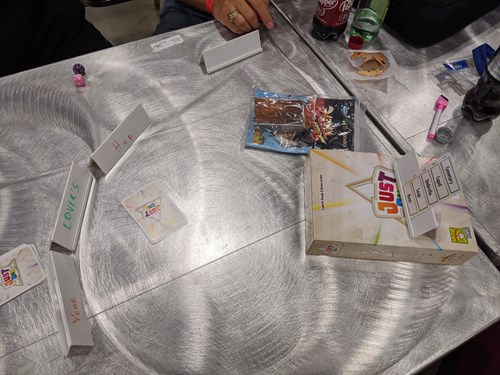 Just One is a cooperative party game from designers Ludovic Roudy and Bruno Sautter. Ludovic and Bruno are also known for designing an immersive cooperative exploration game called 7th Continent, but let’s talk about just one game at a time here. Just One was originally called We Are The Word until it was purchased by Repos Production at which time it was given extra word cards, improved component quality, and a new name. As Just One, the game has taken the party and family game world by storm, edging out L.L.A.M.A. and Werewords for the 2019 Spiel Des Jahres award.

In Just One, players play together to attempt to guess 13 words correctly in a Password style game. One player is the guesser and can’t see the word he is tasked with guessing while the rest of the players can see the target word and write one-word clues on an erasable stand. The trick of this game is that duplicated words are removed from the pool before the guesser gets to see them. Once the duplicates have been removed, the guesser is shown the clues and can either guess the word or pass. Guess the word correctly and you earn the team one point (the cards are points). If you’re not sure, you can pass and that will just cost the team the current card. However, if the guesser guesses incorrectly, not only do you lose the current card, but the next card as well. And that’s all there is to the gameplay.

This game is what I’m looking for in my party games. It’s quick to teach, easy to sit down and enjoy, but leaves you with quite a few tough choices. Do you give the easy clue in an attempt to make sure the person is on the right track? If you do, you might be the only one who does because no one else wants to take the chance. Or you could end up matching with someone that had the same idea. Do you put the more esoteric clues hoping to let the person narrow it down to a specific word only to have you one and only clue be that esoteric clue after others are matched? As the guesser, do you take the shot on the guess that could cost your team 2 points when you aren’t sure or do you pass and maybe lose out on the 1 point you would have gotten when you guess ended up correct? It’s a simple concept, but many of the choices require a little thought and give the game just enough depth the be thoroughly enjoyable.

I give this game 1.5 snoozes. In the end, it is a fairly simple party game and they tend to have me lose interest quicker than more strategic games. However, this game is also one of the best available out there in the party sphere. If you’re looking for a game that you can bust out in minutes, enjoy for half an hour, and move on to a new game, I don’t think you can do much better than this one here. My only complaint is that when Repos Production acquired We Are The Word from Ludovic and Bruno they didn’t name it “Lays” cause I betcha can’t play Just One.