Now, would you look at this.  Two weeks down…two Board @ PAX reports.  I can’t even begin to explain how happy I am to see you made it through that first report.  It sounded like a pretty good game, right?  A game you might want to play for fun or competitively, or even with a kid.  Just a good time.  And then, week 2 is upon you.  And you can feel the doom and gloom of a bad board game being reviewed.  Well, I’m here to tell you…yeah, you’re right. 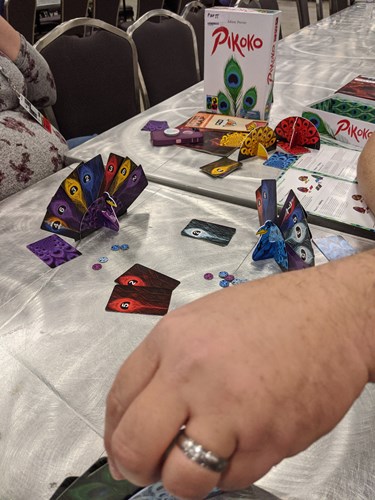 Pikoko is a simple trick taking game by designer Adam Porter with a couple twists.  Each player can see everyone’s cards except their own, and you play the player to your left’s hand when you play cards.  Otherwise, it plays exactly like you would play a game of Spades.  Assuming that the trump suit rotated.

Being such a small and simple game, I don’t feel the need to explain the mechanics of the game beyond what’s above.  Except there’s the bidding mechanic.  Each player bids how many tricks they think the players whose hands they can see will take and then everyone bids on how many tricks their hand will take.  And then at the end of the round, you get 3 points for guessing exactly how many tricks that specific hand took, you get 1 point if you’re 1 off, and you lose a point if you’re off by more than 1.  I’m kinda meh on the whole “bid on every hand” thing that’s going on, but that’s not why I rate this game so low.

The low rating comes from the playing of the game.  First off, there was no indication in the instructions and you can’t look at the cards, so it took me longer than I’d like to admit to figure out how to put the cards in the peacock card holders.  It turns out there’s a dot on the feather you can look at, but the first time playing, I spend 3-5 minutes trying to figure out how the cards get stored so everyone can see them without seeing them myself.  Second, it’s a hidden information game where you’re playing from the non-hidden cards.  It would play the exact same if we rotated the cards to the left one person, and you get to study all but one hand of cards when playing your card.  It’s just knowing 2/3 of the cards in play instead of 1/3 of the cards in play.  The bidding is also slightly off because the bidding happens around the table.  Which means if the other players bid on your hand first and every one of them puts 1 trick as the number that hand is taking, you know your cards are not great before you bid on every other hand at the table.  Meaning you’re at an information advantage from the start.  Finally, the game is played out of these peacock card holders.  Which were cute and made the game aesthetically pleasing; however, it become cumbersome to reach across the table and try to remove a card from the peacock.  It often didn’t want to easily let go, the person who had it in front of them would have to hold the peacock down while I tried to remove the card without removing the other cards from the peacock…just too cumbersome.

As I have done before, I’ll do again for this game.  If you’re looking for a game that is a trick taking game, this game isn’t better than the classics (Spades, Hearts, Bridge).  If you want a trick taking game with more interesting mechanics and more to it than just deal, bid, play, I’d suggest Nyet as a much better game than this.  And if you’re looking for a hidden information card game, go to Hanabi.  It’s way more fun and you actually get to the play the cards in your own hand.  You have ownership of the cards and plays.

This game is a 4.5 out of 5 snoozes.  The mechanics were basic, the bidding was uneven, and the game is just not good enough to be better than or even comparable to games I can already play.  If asked to play this game again in the future, I’d look at them and say Pi-no-no.