Board @ PAX: Trial by Trolley

I’m glad to see everyone is hopping aboard the Board @ PAX train. This is your conductor Nole speaking, and let me tell you, I have absolutely 0 ethical dilemmas when deciding which game to discuss with you all next, Trial by Trolley. 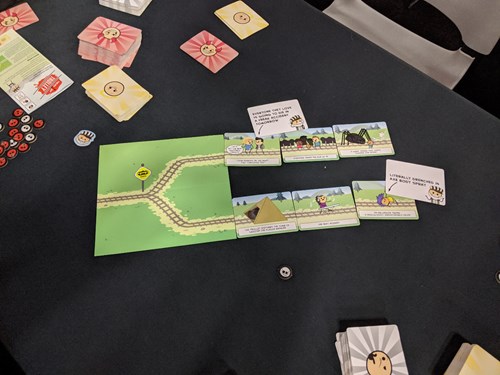 Trial by Trolley is the second party game delivered by the people from Cyanide and Happiness, this time in conjunction with the folks at Skybound Games. Skybound Games is fairly well-known party game producer having published hits such as SuperFight, Red Flags, and Jenga. Cyanide and Happiness is known for their webcomic, and their previous game, Joking Hazard is a party game in the vein of Cards Against Humanity. But that’s a story for a different Board @ PAX.
In Trial by Trolley, one player is put into the roll of the conductor on the famous ethical dilemma “The Trolley Problem”. In the Trolley Problem, a trolley is going down the tracks and coming to a switch. If they continue on their current path, they will murder 10 people, but if the person pulls a switch, only one person will be murdered. Utilitarianism would have you pull the lever since killing one is morally better than killing 10. However, Deontological ethics would say that the action itself needs to be morally correct regardless of the consequences, and pulling the switch would cause you to take part in a morally immoral action. So, doing nothing is the morally correct choice…wait, let’s get back to the game. The game takes all of that out of the equation and instead uses humor to just kill ridiculous things. In the game, one person is the conductor of the trolley and has the ability to pull the switch from the cab. Two teams of players will be given 3 Angelic cards that have things that people wouldn’t necessarily want to run over (Mother Teresa, Gandhi, or a 1st grade science fair full of kids). Those teams will take one of their cards and put it on their side of the tracks. Then, they will be given 3 Demonic cards that they can put on the opposing teams tracks to make the path more appealing for the conductor to runover (like the New England Patriots, Neo-Nazi Velociraptors, or maybe Bill Cosby with a tray full of drinks). Finally, teams are given 3 track modifier cards (like “will one day grow up to win a Nobel Prize” or “has stalked you since the 1st grade”) that they can choose one and modify either track. The conductor will then choose the track they want to run down, killing the people on the track, and giving death tokens to the team that lost. The conductor rotates, teams shuffle up some, and play continues. The player with the fewest death tokens at the end wins.
Personally, I like this game as a party game. The team mixing is one of the strong parts of it for me as I continually get to interact with different people at the table. In addition, this game has some great moments when you think you’ve won only to see a track modifier card really seal the deal for the other team. That being said, it’s a party game that is trying to burst into the adult humor section of party games, and that’s a really busy area anymore. I don’t think this game can be played as long as a game like Joking Hazard or Cards Against Humanity since the gameplay is more structured and will probably feel same-y after about an hour, but it’s also much newer than those games and it felt like a fun and fresh spin on the adult humor party game feel.
I give this game 3 snoozes out of 5. It isn’t because the game is bad, but more because there’s so many games out there that accomplish a similar goal. It doesn’t have much in the way of strategy, but the artwork is really tremendous. Cyanide and Happiness artwork in a game is enough to make any game worth playing once or twice, but if someone were to bring a little heavier of a game to the table than this party game, I’d switch. 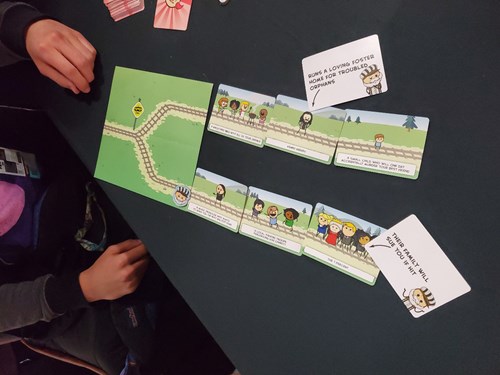