Another week, another Board @ PAX. This is almost becoming a habit. And now that I have you all hooked on these reviews, I have to keep them coming. I need to give the people what they want. Yes, what they want, possibly even need. And with that, I guess it’s time to discuss a game that everyone out there needs to play. It’s the best game I played at PAX all year, which I hope you know from having watched our Top 5 Board Games at PAX video, and a game that is deserving of all the attention it’s been given recently, Wingspan.

Wingspan is an engine building game from Stonemaier Games and designed by Elizabeth Hargrave. Now, I will forgive you if you haven’t heard of Elizabeth since this was her first foray into designing a board game, but I for one am glad she decided to make Wingspan her first game. Because it is a tremendous game. Don’t take my word for it though, take the gaming community as a whole as well. Wingspan currently sits at #23 overall on BoardGameGeek, won the Kennerspiel Des Jahres for “connoisseur/expert game of the year”, won the Deutscher Spielepreis (German Game Prize) which is considered the “Gamers’ Game” award, and was the #3 People’s Choice top game of all time on The Dice Tower’s top 100 list this year.

First off, we need to discuss the components of this game. The artwork on the cover is stunning. The boards look leather backed and when you open them up, the artwork on the boards feels well thought out and easy to read. The bird cards are well made with a linen finish on the cards, have fun facts written on the bottom of the cards, and include average wingspan length for the birds. The cardboard chits are cardboard chits so nothing special there, but the eggs are little wooden ovals that look like candies and help make the game pop. And finally, we’ll talk about the thing that will draw your eye to the game every time, the dice tower. They have an adorable dice tower that is shaped like a bird house that comes with the game and has the added bonus of giving the game one of the best looks of any game in recent memory. I have a few issues with the cardboard used to make the birdhouse, but the birdhouse itself is a great addition to the game. 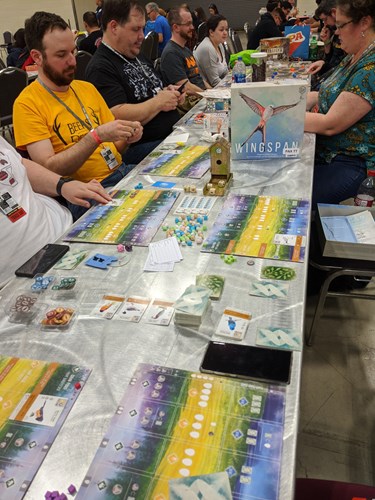 In Wingspan, players are attempting to create the best bird habitats by attracting birds to your wildlife preserves. A game is played over four rounds with players having eight actions in the first round and one fewer action in every subsequent round. Players are given the choice of four actions on their turn: Play a Bird, Gather Food, Lay Eggs, and Draw Cards. To take an action, a player places their cube on the leftmost open slot on the board. They then take the action allowed (the amount of food gathered, eggs laid, or cards drawn will be based on where the action token is placed). But here’s where the game gets really good and different. The player then walks the action token to the left over each played bird in that wildlife preserve. Each bird has an action on the bottom, and some of those actions are called “When Activated” actions. When the cube hits a “When Activated” action space, the player takes that action and then continues moving the action token left. The turn ends only after the action token has been moved all the way back to the leftmost space on the player board. This system allows for the five actions you’ll take in round 4 to actually give you tons more actions than you’ll have when playing 8 action cubes in round 1. At the end of the game, points are tallied based on the number of eggs you’ve laid, the value of your birds, and some other bonuses possibly acquired during the game. The player with the most points wins.

The system is really clean, and the combos you can create make the game feel rewarding. At 5 players, the pacing can feel a little off as your turns don’t come up as often, but there are enough “On other player’s turns” cards that you’ll be watching like a hawk to see what your friends are doing on their turn. When I was playing this, I constantly tried to figure out what I could do on my turn to make the engine I was building more efficient and often times, I had multiple answers available to me. And for me, that’s the mark of a tremendously well-thought game. My only real gripe with the game was that when it was over, I wanted just a couple more turns so that I could really see the engine purr. However, wanting a little more of a game does seem to be better than wanting less of the game. 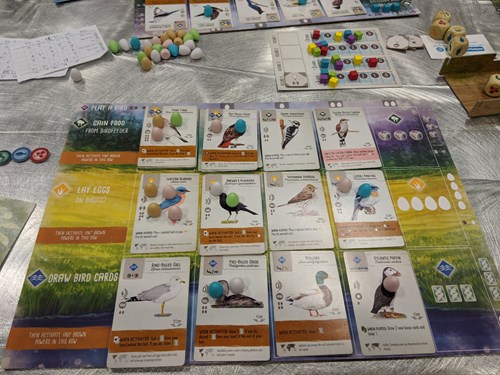 I guess this will end up being a shocking ending to this week’s entry, but I give Wingspan exactly 0 snoozes. I didn’t go into the game thinking I would like it as much as I did, but that’s because this might be the best game I’ve ever played at PAX myself. It’s engaging, it’s thought provoking, it’s beautiful, it’s a game I truly expect to become a gateway game for gamers in the Twenties. Seriously, do yourself a favor and play this game. You might lay some eggs during it, but I don’t believe it’ll lay an egg with you.