Man, time really flies.  It seems like just yesterday we were scrambling around the house getting everything all set up.  Boy was it exhausting.  Yet SOMEHOW, as we always do, we were able to bring it all together.  It was thrilling.  We started off the weekend with the (now infamous) Tournament of Champions and capped it all off with another killer CVGC for the record books.  I will save the ToC discussions for another day/post, but I will say that both Woot and Michael went above and beyond.  It was fun, it was confusing, and it was infuriating. They put in a ton of effort and it showed.  I can't wait for us to do that again in 2029!

I'm not going to bother recapping everything that happened over the weekend, but I wanted to highlight some of my personal highs and lows.  I implore you noble reader to share your favorite / most hated moments from CVGC X in the comments below.  On a somewhat related note, if you haven't already, please share your photos to the following link so that we can all relive these moments as our brains continue to deteriorate with old age: https://photos.app.goo.gl/9W7yQYAunLMGxx5JA

Alright, let's get onto it then.

Here's what I think went well

...and I'm not just saying that because my team won (but it doesn't hurt). 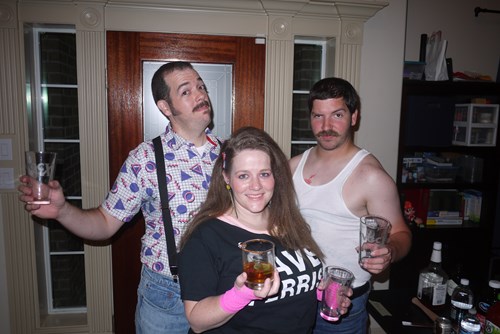 Just look at that team!  How could we be beaten?  I'm honestly surprised that anyone else even tried.  That looks like a group of people that know their booze.  Big shout out to Bobbo and Jess for putting on this event.  It was a lot of fun!  If anyone else has any great pics, be sure to add them to the photobook.

Man was this fun.  Sure, the guys went all in on the ol' womb broom, but we all looked good. 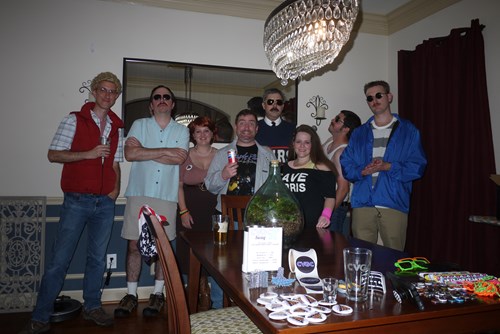 Congrats Erica on the win!  It was hard fought, but well deserved.

I kept them simple, but I was able to finish a few of the TV stands last year.  They brought the TV up to your eyes if you were standing, which worked great for shooting and dance mat games.  I will continue to add to my collection as my space allows.  Next year I think that I'll leave some sharpies around so that people can mark them up and give them some character. 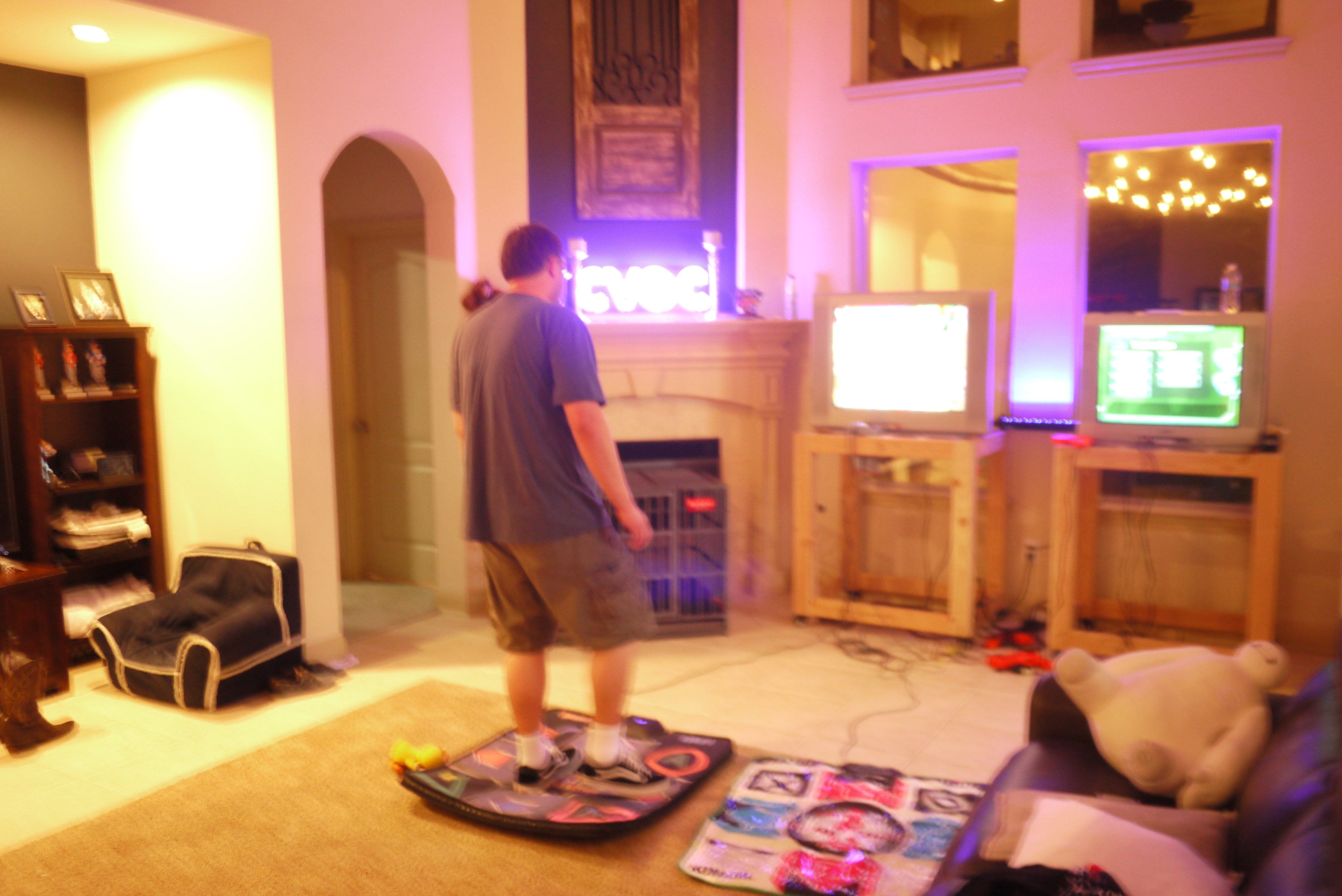 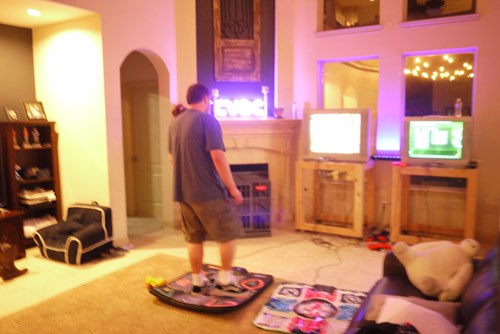 The picture is suuuper blurry, but you get the idea.  Sure, they aren't sexy, but they are functional.

For CVGC X I created and printed a special desktop trophy for the winner.  This won't be a regular occurrence, but, for the big "ones" I will definitely revisit this idea.

Instead of bogging down the auction with pint glasses and shirts, I instead spun that off as a separate store.  I'm not sure if I will go as far out every year (hey, CVGC X was special), but I do think that this was the way to go if I decide to sell this type of stuff again.  I will remind you, if you bought a shirt and it isn't standing up to use, please let me know and I'll replace it for free.  This was my first time making this many shirts at once and I wouldn't be surprised if I screwed up a couple.

As always, you guys find a way to surprise me every year.  This year we had such insane donations such as:

Just wow guys.  With everything you guys made/bought/donated we were able to raise $2500.  Per Kid's Meals Houston, they can feed a kid a meal for less than $2 donated.  That means that we raised enough to give 1250 meals.  THAT'S JUST OVER A THIRD OF ALL MEALS THEY GIVE AWAY IN HOUSTON EVERY DAY.  Sure, you may look at that and feel depressed, but I look at that with great pride.  Houston is HUGE and we fed nearly a third of the kids enrolled in this program for the day.  That's insane to me.  Good job everyone.  Good job.  Seriously; it gives me goose bumps.

And now for the not-so-fun stuff.  Here's where I'm planning to spend some focus.

I thought that this was such a good idea, but I don't think that people knew about it.  We had a Game Boy Camera and Printer hooked up to a Super Game Boy.  The idea was that people would print their pics and then attach them to a special Game Boy themed Moleskin.  We'll try this again, but maybe I will move it down to where the people are.

I seem to say this every year, but I THOUGHT this was going to be the year that we'd be done before midnight.  BOY was I wrong there.  If anyone has any ideas here, please let me know.

Alright, now that the housekeeping is out of the way, let's talk about the tournament.  For CVGC X we decided to revisit the best games from CVGC past.  Here is what we played:

Poor Woot ended up in the Dayyyyyyyyyyyyyyyytona wildcard again against a racing pro (Daniel).  Even still, I'm fully convinced that the play-in game is the way to go from here on out.  It adds a ton of suspense and ropes everyone back in before the break.

Surprisingly Erica, the resident Katamari pro, got smoked.  Even still, she managed to hang on for longer than any other female has done before.  Go Erica!  Way to break that glass CVGC ceiling!

This year our final four was:

Saint took Matt down to the wire, going into the finals in second place.  For the last round we officially opened up the tournament to the seventh generation consoles (Wii, Xbox 360, and PS3), with a game from each system's launch list.  Saint ended up sweeping Matt in both Wii Bowling and Geometry Wars to take home the trophy and bragging rights.  All I have to say is THANK GOD we didn't have to go to Fight Night on the PS3. 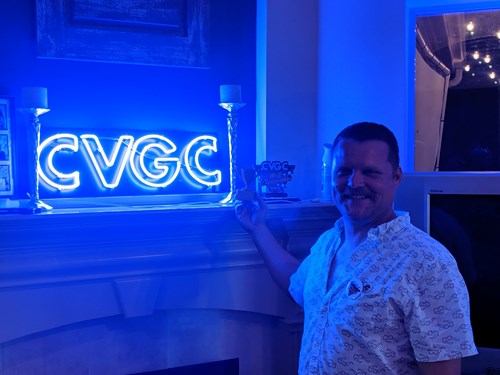 Congrats Saint on your most momentous win yet!

First off, Michael, I couldn't do this without you.  You keep me on task and make sure that I don't fall (too far) behind my planned schedule.  You keep me energized when I need it and grounded when I need knocked down a peg.  And especially thank you this year for pulling down double duty with Woot to deliver the ToC.

Woot, you really knocked it out of the park too.  Your pins were sexy and your gambling game was clever.  Both you and Michael were MOST EXCELLENT!

Again, thank you to everyone who donated.  Every little bit (and lotta bit) adds up.  What we did this year will be hard to top, but you know that we're gonna try.

Thank you to everyone who attended; not just for this year, but for putting up for this craziness EVERY year.  If you guys wouldn't have stuck with it, I wouldn't have either.  You guys really are the best.

Also, guys...thanks again for this sign.  I still can't believe it.  It is beautiful.